I really liked the addition game (created in Scratch) that was presented as a video tutorial in this course.

I had a play and created a multiplication version with an underwater theme, sound effects and a few other variations.

I thought this idea could be used in a series of lessons for Grade 5 students.

Lesson One – Watch video tutorial for addition game. As a class, create a flow chart for the steps in this game. Explore the addition game program by recreating, testing and debugging.

Lesson Two – As a class, discuss how you could use element of the addition game program to create your own multiplication program. Break down the problem into a list of steps. Choose the target audience* and focus multiplication table, discuss what your game will achieve and variations to program. Create a flow chart for your own game.

Lesson Three/Four – Program your own version of the game in Scratch, discussing, testing and debugging as you go.

*Audience could be a younger grade or their class mates. If choosing Grade 5 classmates it could be possible to program more challenging questions and assess the following: 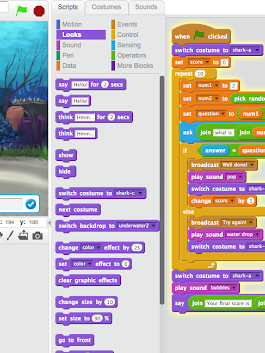 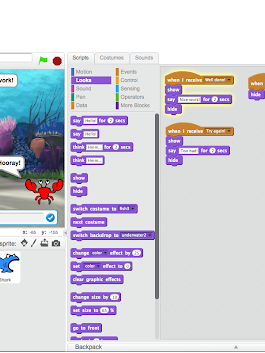 one plus one, 1 comments