This series of lesson plans integrate the following curriculum descriptors:

Initially students are introduced to the attached scratch game, and asked to move the bug to a number of (x.y) locations. The bug is programmed to move with the arrow keys, and students can see the co-ordinates of the bug at the top left hand side of the screen. When students hit the correct location a recording tells them the treasure that is there and they need to write it down. To give students a better understanding of the meaning of negative co-ordinates, some of the co-ordinates will be given in (x,y) format and others as: “10m under water and 30 m into
Australian territory”.

Once students have learnt to navigate the bug to all the correct x,y locations, they are asked to modify the program to add their own treasure locations and give accurate instructions to one of the other students as to how to find it. Further extensions to this lesson would include adding a fish that swims forwards and backwards and needs to be avoided in search of the treasure. 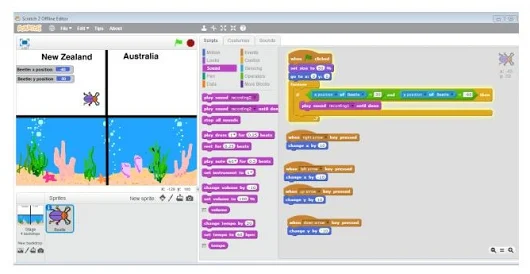 one plus one, 0 comments