I have a big problem with Maths in school because I don't think we teach it. We teach Arithmetic rather than Maths.

We reinforce that Maths has one way to generate one solution to one type of problem.

See Dan Meyer for a better explanation at https://www.youtube.com/watch?v=BlvKWEvKSi8

Sugatra Mitra-style I left them promising to be back in 10 days. "See what you can do" I threw off as I exited the classroom.

Here's one boy's discussion of his game, filmed on my iPhone whilst we were talking about what he had done and what he had learned and what he had problems with. It's a big (300+MB) movie but worth downloading:

Have a look at 1:25 where he describes his use of a "varyeable" – discovered by the class. He describes it further at 2:00

At 2:30 he describes how he found this stuff out and the importance of his collaborative learning.

Towards then end, at 3:30 or so, he describes how he uses the broadcast facility to shut the game down (by dropping a bomb, of course)

The conversation is very rich.

I categorised his accomplishments:
solve problems involving the comparison, addition & subtraction of integers.
represent numbers using variables
connect the laws and properties for numbers to algebra
interpret simple linear representations and model authentic information
represent transformations in the Cartesian plane
assign ordered pairs to given points on the Cartesian plane

He's in year 4.
These statements are from the year 7 Maths syllabus in NSW.
He has demonstrated mastery of these in 10 days in his own time and in collaboration with his friends. 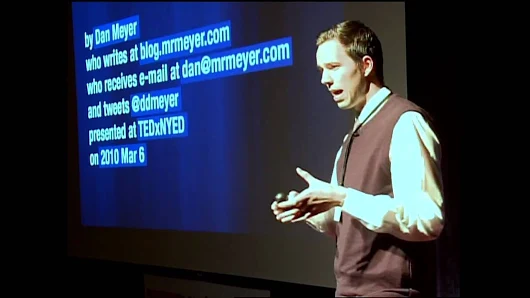 no plus ones, 7 comments